It was felt for many years that Bilbrook lacked the focal point of a War Memorial to commemorate the fallen in the wars from 1914 to the present. The Parish Council decided to install a War Memorial was installed in two phases.

Phase 2: This commenced in October 2010 as part of the Bilbrook Heritage Project instigated and led by Cllr Val Chapman.  It included design, art, and engineering work. Phase 2 was opened on 16ht June 2012 to commemorate the Queen’s Diamond Jubilee Year.

The Artwork on Bilbrook War Memorial

The War Memorial arch is carved in English oak by Robert Cox, Wood Sculptor depicting the history and heritage in Bilbrook; on the left-hand side Bilbrook of old and on the right-hand side newly developed Bilbrook. The Staffordshire Knot, the symbol for the County of Staffordshire is carved at the bottom of each side of the arch.

At the top of the arch is a wooden carving of an aeroplane, of no particular aircraft design, but is intended to be seen as either a Christian cross image or an aeroplane because of the Boulton & Paul Aircraft factory, which opened in Pendeford, near Bilbrook in 1936. 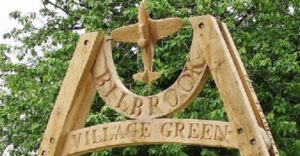 The design of the War Memorial Arch and Seating arrangement is intended as a ‘place of contemplation’.  Up-lighters were later placed at the War Memorial so that it can be seen by passers-by in vehicles or on foot