The Monarchs Way in Bilbrook

The Monarch’s way is a long-distance walk of 625 miles using footpaths and bridleways which closely follow the route taken by Charles II and visiting many historic sites and buildings. The route goes through two World Heritage Sites, one National Park, and six areas of Outstanding Natural Beauty plus some of the finest scenery in western and southern England.

The walk has had to be adapted due to “modern” features such as canals motorways and Industrial sites, but also joined the route of Bilbrook Jubilee Walks as part of Queen Elizabeth II’s Diamond Jubilee celebrations in 2012.  Details of the Jubilee Walks can be found on the Bilbrook Walks Page.

The Monarch’s Way in Bilbrook

Of national historical interest is the part of Charles II’s escape route after his defeat at the Battle of Worcester on the 3rd of September 1651. Of local interest is the 11 1/2 mile route from Boscobel to Moseley Old Hall which passed through Bilbrook.

Following the defeat of the Royalist forces and the end of the First Civil War, leading to the execution of Charles the First on 30th January 1949, his wife Queen Henrietta Maria returned to her native France, along with their eldest son who became Charles the Second.   Charles returned to Scotland in 1650 in order to raise an army and was crowned King of Scotland on 1st January 1651.  In August 1651 Charles returned to England with his army to try and regain the throne from the Parliamentarians, led by Oliver Cromwell.

The two Armies met on 3rd September 1651 at Worcester where Charles’s army was heavily defeated.  Charles along with some courtiers and supporters were guided away from the battlefield. The party travelled north and one of his party was Mr. Giffard of Chillington Hall who agreed to guide Charles to a property on his estate, being Whiteladies Priory, and then on to Boscobel House.  Plans were then made to try and get Charles across the border into Wales, but these efforts failed and Charles returned to Boscobel, the home of the Penderel family, where he famously hid from the Parliamentary forces in an oak tree.  The next plan involved moving Charles to Moseley Old Hall. 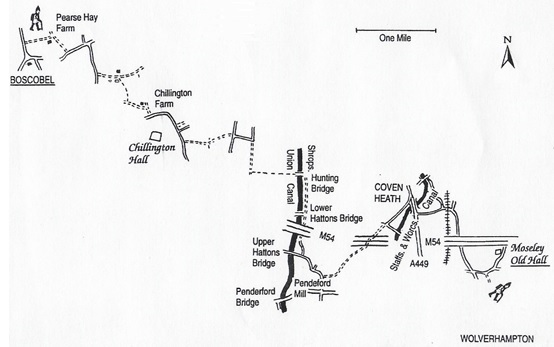 So far Charles had been making his attempts to escape on foot over rough and uneven terrain in ill-fitting shoes so that by the time this latest plan was devised his feet were sore and blistered to the point that he could hardly walk. A farm horse was found to carry him at least part of the way. The Penderel brothers plus other family members and loyal supporters went with Charles, but as he went Charles commented on the sad state of his ride, to which Humphrey the Miller, who owned the horse, quipped that “My liege, can you blame the horse to go heavily when he has the weight of three kingdoms on his back?”

Charles rode as far as Pendeford Mill in Bilbrook from where John and Francis Penderel, as well as Francis Yates, escorted Charles the rest of the way on foot to Moseley Old Hall, where he arrived in the early hours of 8th September.

Footnote:  In 1660 Charles was invited to return to England to take the throne.  He rode into London on 29th May, his 30th birthday.  This date is known as Oak Apple Day, which references to his refuge at Boscobel.

Details of the walk have been reproduced with kind permission from the Monarchs Way Association along with associated diagrams.  The local map route has been kindly prepared by Cllr Denis Hutchinson.