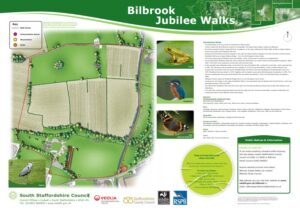 The Jubilee Walks are a great way to explore the beautiful countryside in and around Bilbrook. Below you will find maps of the walks. The Jubilee walks were mapped out by the Parish Council and a number of sponsors to celebrate the Diamond Jubilee of  HRH Queen Elizabeth II.

Route
Begins in the top corner of the Playing Field
Crosses the Moat Brook, which drains Oaken, Codsall and Bilbrook, by means of a footbridge
Follows a footpath to Upper Hattons
Swings right along Pendeford Hall Lane
Passes, on right, The Round Wood and Rose Cottage and on the left Upper Hattons Cottage.
Continues along Pendeford Hall Lane to Upper Hattons Bridge – No.5 on the Shropshire Union Canal
The route swings right and follows the canal towpath, which, at this point is carried on an embankment
As this approaches Wobaston Road the canal crosses the Moat Brook via a semi-circular arched sandstone aqueduct, dated 1832. To the left is the confluence of this brook with the River Penk
As the towpath nears Wobaston Road, on the left is the site of Pendeford Mill, a watermill on the Penk, which operated from c.1650. The mill house was converted into two cottages in 1912 and was demolished in 1961. A Nature Reserve now occupies part of the site of the mill and of Pendeford Hall; the 68 acre site was developed by Wolverhampton in 1976. Pendeford Hall was rebuilt in 1670. Together with its estate, it was sold to Wolverhampton Corporation in 1935.  The Hall was requisitioned during the Second World War and partly demolished in 1953; the demolition being completed in 1968
Wobaston Road is joined at Pendeford Bridge (No.4) on the Shropshire Union Canal
Crossing over the bridge, to the right is Pendeford Wharf, once associated with the Boulton Paul Aircraft factory, which was developed between 1934 and 1936
Wobaston Road is followed to the access track leading to the Allotments
The route then crosses a field and skirts the edge and rear of some houses before crossing a footbridge and crossing the field in which Bilbrook Village Hall stands.